Dora Bassi wrote extensively about her artistic journey. The texts quoted here are taken from catalogues, interviews, and autobiographical notes. [1] 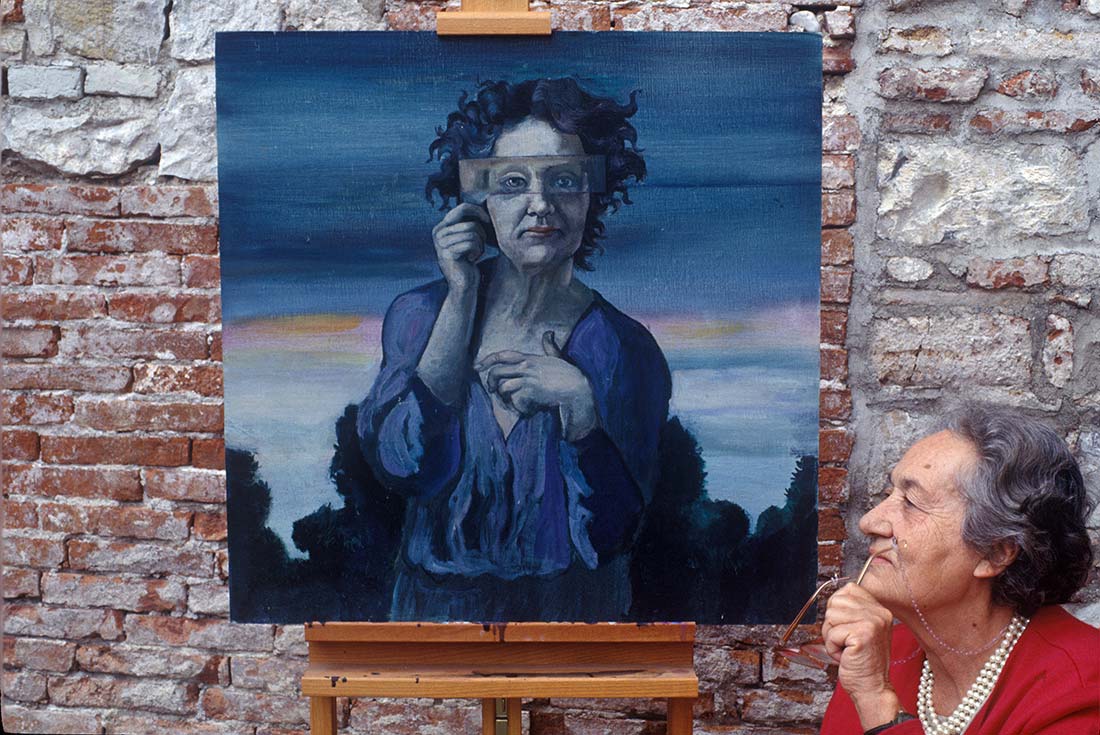 Joining neorealism was the chance to work, within a group, on a specific theme: the function of art, its relationship with man, the real, its power of representation. I was less interested in the political motive that was predominant for some artists. I was fascinated by neorealism’s possible paths, rather than by its aims, therefore my works created within the context of Friulian neorealism look more like dry chronicle… . As far as language is concerned, however, something took over and never left me: the turning of the “beautiful” colour into expressive colour. The pictures I painted from ‘52 to ‘56 constituted the premise of the other precious experience of Informalism. It was not just the weakening of ideological pressure which made me take a step away from neorealism, but rather the acquisition of such a thickness of the pictorial matter that it was able to receive signs, wounds, vibrations…
(From materia a memoria, in Dora Bassi, Comune di Gorizia, 1997)

See the works in sections “Landscape with figure” and “Abstraction”

In my studio in Udine I was an artisan, a ceramist, I was getting a break from the torments of art … I used to build structures out of independent elements, made of wax, polystyrene, and then when I had enough money I would make the cast in Verona…
Black. A kind of black that affirmed itself in space in a peremptory way… My concern was to give absolute identity to shape by framing it in space.
(From materia a memoria, cit. 1997)

I experimented with many techniques. The machines I assembled were certainly dynamic and were aimed at simulating spatial trajectories in expansion. This was a procedure of making sculptures that was common among many artists, although being abstract, my shapes were a metaphor for the reality of the moment, a spatial dream.
(from D. Bassi A. Santin, Metafisico quotidiano, Trieste 2004)

… What I was most interested in was to lead the shape towards its utmost simplification, in order to vitalise a non-static organism by means of a few elements so that it could interact with the external world and recharge itself from within.
First of all, I started by abandoning traditional materials such as wood, bronze, terracotta. I needed something that could determine itself not as a mass but as a receiving element… Semi-polished metal sheet is perfectly able to activate light and synthesize its effects.
Such a disciplined reflection creates fictional, illusory, almost tridimensional images within the sculpture.
(From Note biografiche, Milano 1985)

From specular sculpture to mirror boxes

I resumed topics from ancient painting, in particular those belonging to mannerism, I imitated them, deprived them of their mythical allure and took them towards a metamorphosis by means of rotating devices in movement. A work conceived in this way is destabilizing. In this way I could express my doubts concerning the function of art itself. I was running every moment to visit the art gallery of Brera to look at Mantegna, Bellini or Piero della Francesca… That was an intense and exciting period for me. I was not talking to anybody about it and I was proud of working outside any movements or artistic wave. Transavantgarde would only become popular a few years later…
(A. Jaconcig, Dialoghi gradiscani, 2007)

I took leave from the great exponents of the past by replacing the frigid mask of Eros with the much more down to earth one of Humphrey Bogart, I decisively beheaded Venus Anadyomene, Leda, Fornarina, whose limbs became gum. I mutilated sculptures. It was the beginning of the ‘80s and I had been navigating through Appropriation Art for some years without even realising it. However, something had penetrated into my bones: the limitless time present of the art, the uniform identity of memory, its neverending vitality…”
(from Da materia a memoria, cit. 1997)

See works in section “The image and its double”

… as a sculptress, I was achieving a certain appreciation…however I was soon caught again by the ancient daemon of insatisfaction, of restlessness. Everything I was doing appeared to me as a continuous betrayal of the vital reasons that had let me into this world. They were somewhere else, at the deep core inside myself…
(from D. Bassi, L’eterno trasloco, Lapis, Percorsi della riflessione femminile, n.12, giugno 1991)

I was pointing towards myself that same telescope I had used to observe the history of art and then to shape my own reflections into art. I would say time was ready to reactivate, within my art and its making, the links between intellectual speculations and the world of my affections. I felt sufficiently equipped to do it, but I held some doubts about the language. Sculpture was to be excluded, installations – a common expression at the time – appeared inadequate to me in terms of what I wanted to express. As for painting … I felt that was the right instrument. Traditional painting in the different moments of its path, without stylistic limitations! All painting, used as a tool of enquiry inside myself.”
(from La luce nell’ipotesi estetica di Dora Bassi, Udine 2001)

I had a dazzling encounter with Charlotte Salomon in the basement of the Jewish Historical Museum in Amsterdam – a young artist who died in a Nazi camp. Over a thousand plates of watercolour on paper where, with a penetrating and light handwriting she gave an image to the history of her life: an excavation inside memory by means of all the languages that contemporary history of art had laid at her disposal, without prejudices. I had never seen anything similar to that… I went back to my studio apartment in Sesto, decided to embark on a journey that would have led me to my mother, to my father, to the gardens of my childhood and I remembered, once again with insistence, the words spoken by Dino Basaldella: “When an artist faces crisis, he must go out from what he is doing and, most of all, he must handle different subjects, he must change instruments”.
(From materia a memoria, Cividale 1997)

We do not descend but rather surface from our stories if memory, the metaphor that is alive in the work of art, opens us up towards the living present… memory restores things transfigured and I start thinking about a metaphysical memory, about an energy of the enigma that becomes image. For this reason I had to find a technique for myself that could be close to the meanings that the things of life have for me… I started to look again at reality, choosing among the infinite variety of colours, being concerned about showing the luminous energy of the image lived again…
(from Metafisico quotidiano, Trieste 2004)

See works in section “Time and memory” and “Childhood”

The colour of the evening

My apartment has two rows of parallel windows, placed north-east and south-west. The sun completes its daily journey, animating objects and walls with its beams… Therefore I had to observe and learn from the sun. I had to conceal, evoke, melt, recompact… Simple tales, that could be verified in daily life: the rooms, the windows, a curtain shaking in the wind. The eyeglasses of the long sighted gaze lost in the void… a work on the minimum and by subtraction, the objects, the situations put on stage have the consistency of thoughts, which are stronger than things that are known. I am trying to transmit what I deeply feel, the mystery of existence. I mould matter a lot. In the best works, profundity arises from painting’s transparences and vibrations. I abandoned the belief that art is a process. As far as I am concerned, art is simply the work itself.
(from D. Bassi, A. Santin, Il tempo, l’età, l’opera d’arte, 2000; Metafisico quotidiano, cit. 2004)

See works in section “The colour of the evening”

The right to call myself artist

Now, right now, being unsteady in health, angry towards my betraying body, indifferent towards the passing of time, in solitude and in the freedom of mind that only old age – a good one – can assure, I still have hope in the perfect work of art, the one that can eventually impose to my conscience the right to call myself artist.
(D. Bassi, A. Santin in Metafisico quotidiano, Trieste 2004)

As an artist, and with the limited talent I dispose of, I am convinced I am expressing a form of respect towards life, towards the image of humanity, towards the generosity of nature. I do not provoke, nor contest or mock. I do not torture nor deform. I try to understand the voices of living in its most flebile infections. I do it by means of painting… by using the technique of glaze and with a slow rhythm.
(A. Jaconcigh, Dialoghi gradiscani, cit. 2007)

See works in sections “Altair” and “The golden legend”